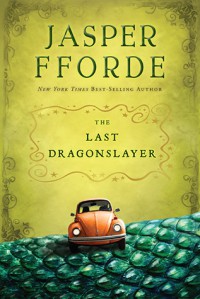 I've heard many good things about Jasper Fforde, so I finally picked this up from the library.

Jennifer Strange is an indentured servant living in an alternate version of the United Kingdom - the Ununited Kingdom, that is, where she manages what's left of the country's sorcerers. Their magic greatly diminished, they now use their powers to unclog drains, fix electric wiring, etc. However, that all changes when everyone gets word that the last dragon, and possibly the source of all magic, is foreseen to be killed - by Jennifer Strange.

The voice is quirky and fun for a while, but only a while. The charm quickly wears off and gets annoying quickly, undermining the book's serious moments. The book begins to have a single emotional tone: ------- Not funny (as was promised), not quite boring, not exciting, but not quite uninteresting. There's also so much time spent on explaining things that any immediacy of plot is lost in the types of wizards and levels of sorcery and the history of the Ununited Kingdom.

It's awesome that the subject of the prophecy is a girl, and the girl without magic who's surrounded by magic, but beyond that I wasn't too impressed.

There were too many characters introduced that I really don't have time to form an opinion about them when they do something relatively important to the story. Names are thrown about as if they mean something to me, and I'm wondering if this is somehow a sequel series maybe?

Aaaaand this:
"'Frightful, frightful woman. Her love of glittery things, fine robes, and bathing in rabbit's milk set feminism back for centuries.'"
(????)

I'm really not sure what made this book so funny to everyone, but it just didn't work for me.